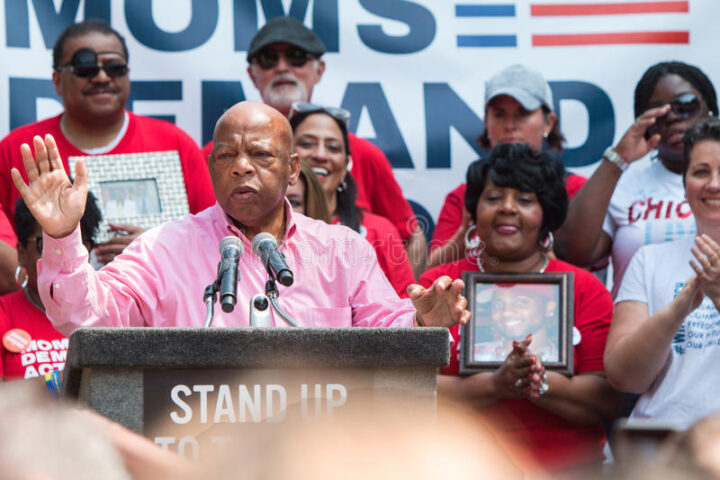 Over the last two decades, hundreds of the late Congressman John Lewis’s colleagues in the U.S. House and Senate—Democrat and Republican—joined him on an annual pilgrimage to Selma, Alabama marking the anniversary of March 7, 1965’s Bloody Sunday.  On that day, 25-year-old John Lewis and his civil rights movement colleagues, having set out on a peaceful march toward Montgomery, were badly beaten by state troopers.   The assault was captured by television cameras, and that night ABC reporter Frank Reynolds interrupted the network’s long-awaited TV premiere of Judgment at Nuremburg to air the newly arrived footage from Selma.  To the nearly 50 million viewers, the historical echoes were inescapable.

An awakened conscience among the American people, the leadership of President Lyndon Johnson, and conscientious collaboration in the Congress led to passage of the Voting Rights Act of 1965.

On January 5, 2021, Georgia voters elected two new United States Senators.  Rev. Ralph Warnock is African American and the pastor of Atlanta’s Ebenezer Baptist Church. John Lewis was a member of the church, and Rev. Warnock presided over his funeral.  Jon Ossoff, a Jewish son of immigrants, was once an intern in Congressman Lewis’s office.  Their election shifted the balance of power in the Senate and strengthened faith in the health of American democracy.

The next day, President Donald Trump, refusing to acknowledge his defeat at the polls two months earlier and having led his supporters to believe falsely that victory was being stolen from him, incited a violent seditious insurrection.  His furious followers overwhelmed police and ransacked the U.S. Capitol in a serious threat to the lives of Vice-President Mike Pence, Senate Majority Leader Mitch McConnell, House Speaker Nancy Pelosi and other lawmakers.  Five people died, including Capitol Police Officer Brian Sicknick.  As in Selma in 1965, the assault was fully captured on video; unlike in 1965, every citizen with a cell phone or a television could see it unfold in real time.  Very much like 1965, to any citizen with a smattering of knowledge about the rise of Germany’s Third Reich, the historical echoes were inescapable.

To Arnold Schwarzenegger, the movie star and former California governor who grew up in Austria after World War II, the historical echoes resounded especially loud and clear.  In a powerful 7-minute video, he links the storming of the Capitol by the pro-Trump mob to Kristallnacht, describes how his father and their neighbors were misled to embrace the Fuehrer by lies similar to those Trump fed his faithful, and shares the painful personal memory of being surrounded by men who “drank away their guilt of participating in the most evil regime in history.”  Schwarzenegger ends the video picking up a sword and describing how it is tempered and strengthened by pounding it with a hammer and then heating and cooling it.  Our democracy, he concludes, “is like the steel of this sword.  The more it is tempered, the stronger it becomes.”

Reporting on the traumatic and heartbreaking experience of Capitol staff members and workers following the rampage, Aishvarya Kavi wrote in the New York Times:

“One Black congressional staff member who also took a walk through the Capitol to survey the aftermath on Wednesday night said that despite all the damage, he had been stopped in his tracks outside Representative Steny Hoyer’s office, where a poster honoring John Lewis, the congressman and civil rights leader who died in August, had been displayed. It was missing.

“He looked for it feverishly and found only a broken piece on the ground next to a trash can. The image of Mr. Lewis was gone. All that remained of his celebrated quote, “Get into good trouble, necessary trouble,” were the final two words — smudged by a boot print.

“‘That portrait was draped in black cloth,’ he said. ‘They destroyed it.’”

On January 20th, Joe Biden and Kamala Harris were sworn in as President and Vice-President of the United States in front of the Capitol.  The time between the insurrection incited by President Trump and their inauguration is close to the period between Bloody Sunday and the culmination of the Selma-to-Montgomery Voting Rights March in front of Alabama’s State Capitol.

Three heroic human beings—Jimmie Lee Jackson, James Reeb and Viola Liuzzo—were killed in or near Selma in March 1965.  Sadly, white terrorist resistance to black civil rights brought more murders both before and after passage of the 1965 Voting Rights Act.  But the tide had turned.  African American citizens, under protection of the United States government, registered, voted, ran for office, lost, and won throughout the South.  John Lewis served 17 terms in the U.S. House of Representatives.  Both his pastor and his one-time intern will soon join the U.S. Senate.

By the time John Lewis led pilgrimages with his Congressional colleagues on its anniversary, Selma’s Bloody Sunday was a hallowed event.  When it actually occurred, it was horrendous and terrifying.  Other terrible days have followed in our nation’s long journey toward racial equity. Bloody Sunday, though, became a turning point—away from resounding echoes of white supremacist terror toward a multiracial democracy with liberty and justice for all.

January 6, 2021 could be a comparable turning point – perhaps an even greater one.  Response to it can temper and strengthen the steel in the sword democracy wields against tyranny.

The poster honoring John Lewis outside Congressman Hoyer’s office in the Capitol was torn down, trampled on, and destroyed.  The power of John Lewis’s legacy was not. In the months—and years—ahead, John Lewis’s Congressional colleagues’ readiness to remember his vision and spirit can determine the direction and destiny of our nation.  If they fail to find and cultivate among themselves aspects of moral leadership akin to those of John Lewis, the nation they represent risks historical echoes of Naziism becoming not only inescapable but ever more menacing.