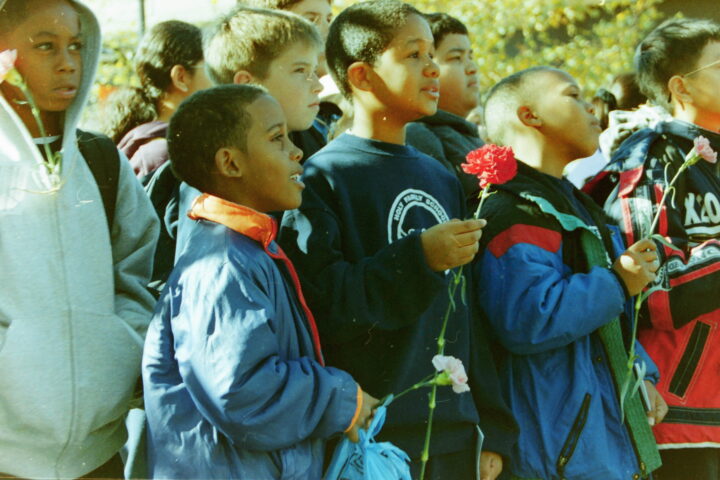 History turns on small hinges. We may look back at the question posed by a 76-year-old African American woman as a key factor that made Joe Biden’s presidency possible. At a time when his primary campaign was floundering, Jannie Jones, a church usher beckoned to Congressman James Clyburn of South Carolina and whispered, “I need to know who you’re going to vote for.” Clyburn replied, “Joe Biden. Are we together?” Ms. Jones’s next question was, ”What are you going to do for him, for the people?”  At that moment, says the congressman, “I knew I could not stay silent.” His endorsement opened the floodgates to Biden’s overwhelming victory in South Carolina and in other states in the following weeks.

Jannie Jones’s great-grandmother arrived in South Carolina on a slave ship. Over the decades, black women have fought tirelessly for justice and truth, against unceasing resistance, calling America to live up to its founding promise. It is fitting that a woman of Jamaican and Indian descent should be the first-ever woman to become our vice-president. I rejoice for our four granddaughters, two of whom are multi-racial.

Kamala Harris and Joe Biden face a daunting task. The result of the presidential election was decisive. But it is a stark –  many would say shocking – reality that 71 million Americans voted to give Trump another four years. Even more alarmingly, senior Republicans in an effort to secure their own political fortunes in a Trump-dominated party, are supporting the baseless argument that the election was stolen.

Why do people remain so fervently loyal to a leader whose political rise began with a lie and whose term of office has been characterized by misinformation, disregard for moral and ethical norms, racially inflammatory tweets, narcissism and incompetence? It is certainly a time for some introspection.

At one level it appears that the economy outweighed the virus in the minds of many voters. The GOP’s law-and-order message also resonated. Jamie Harrison was running a competitive campaign in his bid to unseat Senator Lindsay Graham in South Carolina, but his campaign “plateaued” says Congressman Clyburn, when the “defund the police” slogans began to be posted over his picture in attack ads.

Perhaps many people did not reveal their true feelings to pollsters. I am reminded of the razor-thin 1989 victory in Virginia by Douglas Wilder, the nation’s first elected African American governor. Polls had given him a 15-point lead and even the exit polls indicated a clear 10-point win. Yet the final count showed just a 1.6% margin, leading to a runoff.  Clearly, many voters had been reluctant to reveal their discomfort with voting for a black governor.

It’s impossible to discount the fact that a large section of the country feels deeply threatened by changing demographics. This, combined with an economy that values Wall Street over Main Street and the disappearance of  traditional blue-collar jobs, has led to enormous insecurity, a sense of betrayal, and loss of dignity. When people feel uncertain about their future they will often coalesce around false narratives. Facts no longer matter, even in matters as grave as the current pandemic. One survey indicated that in the 376 counties with the highest rate of COVID infections, the president secured 93% of the vote.

Truth is the biggest casualty of the past four years. If you feed people with lies for long enough, they will ultimately come to believe them, particularly if these lies play to their sense of loss or grievance.  How can we have constructive conversations in an atmosphere where there is such a breakdown of trust over simple facts?

Democrats, and liberals as a whole, should exercise some humility and listen carefully to genuine fears and concerns. I am struggling to comprehend the thinking of those who voted for Trump, especially the 80 percent of white evangelicals who overlooked his evident lack of Christian principles. (It is significant, however, that Biden closed the gap from 2016 by 11 percentage points, a swing of over four million votes.) But lecturing those we disagree with is unlikely to be productive. A majority of Americans – including many African Americans and Latinos – are more conservative in some of their views than white radicals would like to believe. Overuse of the language of “wokeness” and concepts such as intersectionality and critical race theory simply underscores the perception of an intellectual elite disconnected from middle America.

How might we frame conversations in ways that engage everyone rather than drive people apart? “Reimagining public safety” is a theme that is much more likely to get everyone to the table than simply a demand to defund police. Most Americans want the same things: good schools, a living wage, affordable housing, health care, and a clean environment.

Can we learn to ask questions in a spirit of genuine inquiry? Questions that are not judgmental, that elicit the sharing of personal stories, and that help to shed light on the underlying issues. The future of American democracy may depend on it.