We are mid-way through a month of travel in the UK, visiting family and friends. It’s our first extended visit since 2005.

We are delighting in the beauty of the British countryside and the multitude of historic sites which seem to appear at every corner of the towns and cities. So far, we have visited three UNESCO World Heritage Sites!

The color and texture of the cloud formations and the soft late afternoon light are unlike anything we see back home in Richmond, Virginia. We enjoyed hiking in the Yorkshire Dales and the Lake District with drystone walls and stunning views over the passes.

British B&Bs have improved immeasurably over the years with very comfortable beds and immaculate ensuite bathrooms. (Today we are comfortably ensconced in a wonderful Airbnb overlooking Loch Tay in Scotland with cows and sheep grazing outside our window.) But be warned, most Airbnbs do not offer breakfast! And curiously, we often found it difficult to find regular restaurants in country towns which are dominated by pubs and by tearooms that only open at 10am and close at 5pm. 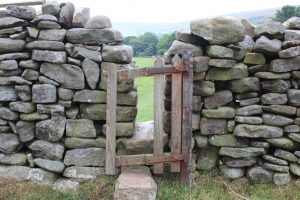 We hired a car on arrival and have covered several hundred miles in England and Scotland. The road surfaces here are far superior to those in the US; even on tiny country lanes (including some incredibly steep and winding ones) I scarcely encountered a pothole. Also, it is nice to drive in a country where people do not pass on the inside lane and trucks do not ride on the fast lane.

We must add a word about Britain’s intrepid cyclists. This seems to be a rapidly growing sport and we were awed watching scores of bikers climbing almost verticle passes often hemmed in by tour coaches and campers and without the protection of dedicated lanes.

I am reminded of Britain’s love of dogs. The owner of a pub in the Yorkshire Dales had an enormous St Bernard which sprawled across the area in front of the bar so that customers had to step over it to get to the tables!

As soon as we crossed the border into Scotland we were impressed by the vast reforestation projects visible on previously bare hills. This is obviously a growing industry in Scotland and must be helpful to the climate. Equally noteworthy are the number of windfarms.

Britain is experiencing some of the same challenges and need for trustbuilding as the US. There is considerable anxiety at the ineffectiveness of the central government and uncertainty over Brexit. Despite fierce opposition to immigration from the far right, it is nice to see the increasing diversity of the country in many sectors and to hear black British speak with broad regional accents. Just yesterday the country celebrated as Dina Asher-Smith smashed the 200m record to win gold in the European Championships having won the 100m a few days earlier.

We were hosted in Leeds by Peter Vickers, godfather to our eldest son, Neil. Peter heads Vickers & Sons which specializes in the development and manufacture of lubricants for the textile and marine industries. For generations the family has run the business on principles of integity, teamwork and responsibility. Peter’s father was a good friend of my dad who came from a trade union background. They worked together to overcome class warfare in British industry.

We were inspired by our visit with Elizabeth Carson, at 90 still spry and keen of mind. Although she lost her house to a freak fire last month, she is amazingly cheerful in her temporary flat and she took us to dinner with neighborhood friends in the historic town of Haddington, near Edinburgh. Would that we all could be so resilient in the face of adversity! Her steadfast faith on God’s practical guidance for daily life and her care for others is an example for us all.