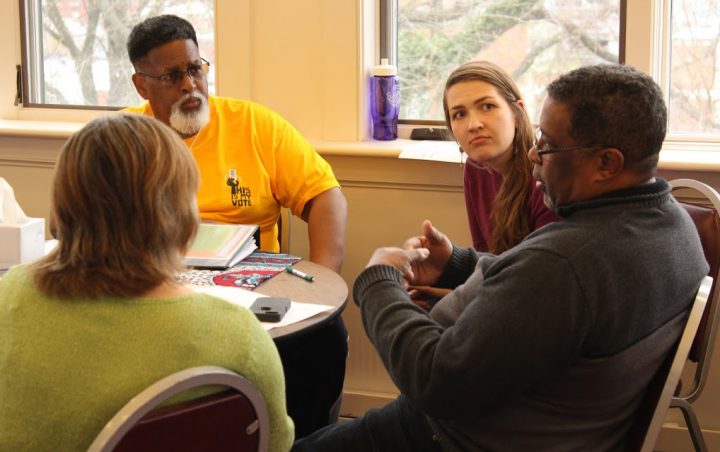 I often get ideas for blogs while working in the yard. This morning, battling some particularly stubborn wiregrass, I thought about Steve Bassett, one of Virginia’s beloved singer-songwriters.

In 1993, as our Hope in the Cities team was preparing a national conference in Richmond, we had the idea to ask Steve to write a theme song. My colleague Rev. Paige Chargois and I drove out to his home in Cartersville. We sat on the front porch and talked about our vision that the conference would help to start “an honest conversation on race, reconciliation, and responsibility.” Steve listened carefully and after a while he said, “I think I’ve got it.” A few days later the phone rang in our campaign office and Steve was on the line singing:

That’s where the future is.

There’s healing when it gives.

The differences end in there.

That’s what I’ll do to get right with you,

I’ll start with my heart.

In those few lines, Steve encapsulated the core of Initiatives of Change and its work of Hope in the Cities: the willingness to start with ourselves rather than point the finger of blame. 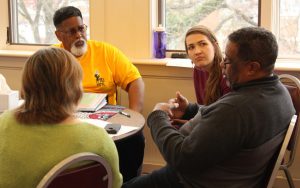 We have become known as a leading exponent of dialogue across racial, political and religious lines. Cricket White, our lead facilitator for many years, believes that the most powerful moment in any dialogue occurs when someone takes responsibility for what they or their group has done to create or perpetuate a problem and is able to claim responsibility for it in front of the other group. “It changes the whole dynamic because the other side knows already. It’s not news to them!”

We have seen this to be true in countless encounters such as with Muslims and Evangelical Christians or with grassroots leaders and business executives.

The refusal to be limited by a victim-perpetrator paradigm sometimes provokes a reaction. But the theologian and civil rights leader Howard Thurman put it bluntly: “The root of what I condemn in others is found at long last in the soil of my own back yard. What I seek to eradicate in society …I must first attack in my own heart and life. There is no substitute for this.”

No matter how convinced we are about our point of view, no matter how deeply we feel the wrong of injustice, we are unlikely to engender change by “continuing to glare at each other from self-righteous and isolated positions,” to borrow a phrase from columnist William Raspberry who once described America as “a nation of bad listeners.”

There are many ways to describe the work of Hope in the Cities. We teach skills of facilitation, walking through history and creating shared community narratives, understanding white privilege, implicit bias, and the use of data. But at its core is the ability to create a space where individuals feel welcome and find the courage to make an honest inventory of their own lives, to search deeply into their motivations and to identify personal blockages – or what my early mentor John Coleman called “excess baggage.”

This honest introspection is not for the fainthearted. My 1985 documentary, The Courage to Change, illustrates how it has formed the basis for our work since the beginning.

Cleiland Donnnan, a well-known personality among the Richmond establishment as the leader of the Junior Assembly Cotillion, was deeply affected by one honest conversation: “I saw clearly my own false pride in my ancestors and all those beautiful plantations along the James River. Standing out like a bolt of lightning was the hurt and pain and suffering of slavery. But most of all, the seemingly small slights stood out – my own arrogance, slights, my thinking that the blacks in the East End had their place and I deserved my place in the West End of town.”

For Audrey Burton, a veteran African American organizer, the challenge was “to reconstruct my model, to become free of hostility, anger, hate and frustration… It was a spiritual transformation, not an intellectual one. Rather than constant confrontation, I learned to be quiet, to reconnect. My behavior and language changed. Way down, deep inside, God called me by name.”

Such moments of transformation lead to new relationships and to inspired action. The demonstration of radically changed lives and the often unexpected partnerships that can result, have done far more to transform racial dynamics in Richmond and other communities than exhaustive analysis, exhortation, or advocacy.

The essential first step is the willingness to say with Steve Bassett, “I’ll start with my heart.”