The final day of the TRHT Summit starts with a presentation by Manuel Pastor, Professor of Sociology and American Studies & Ethnicity, who directs the Center for the Study of Immigrant Integration at the University of Southern California. He lays out some of the major cleavages in the country. One is the rapidly shifting demographics. By the end of the decade minorities will be a majority of the workforce. (But net migration from Mexico is actually negative partly due to lower birthrates.) Interestingly, Pastor says “racial anxiety is strongest in regions where demographic change is not happening,” e.g. the Rust Belt. There is also a growing social distance. Racial segregation has decreased in urban areas but income segregation is increasing. Cities are becoming whiter, while suburbs are more diverse but they don’t have the necessary social service infrastructure. Another factor is the racial generation gap. The median age for Latinos is 27 compared with 56 for whites. “Whites don’t see themselves in this younger generation,” says Pastor.

Pastor also notes that regions that work toward equity have stronger and more resilient growth for everyone. “For example, San Antonio introduced a sales tax to support pre-K education for disadvantaged kids. The leaders of the Chamber of Commerce supported it because they saw it as an investment in the future.”

The rest of the day is devoted to taking the TRHT guiding principles and the recommendations of five design teams (narrative change, racial healing and relationship building, separation, law and economy) who have developed papers over the past several months, and begin to imagine how they might be applied in communities across the country. 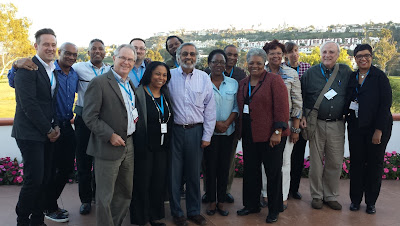 The Richmond group convened by Initiatives of Change/Hope in the Cities includes representatives of Richmond City Council, the Office of Community Wealth Building, Bon Secours Health Systems, Richmond Hill Community, Virginia Center for Inclusive Communities, Richmond Redevelopment and Housing Authority, the American Civil War Museum and the University of Richmond. Other groups are here from Los Angeles, Minneapolis, Baton Rouge and New Orleans, Buffalo, Dallas, as well as Mississippi, New Mexico and Michigan. Each group spends five hours together working through the process and beginning to develop plans for first steps.

The guiding principles include a commitment to an accurate recounting of history, which has been largely told by the dominant groups in our communities. An atmosphere of forgiveness must be cultivated and people of all backgrounds encouraged to tell their stories without fear of recrimination. Equally important is a clear and compelling vision with ambitious but achievable goals with progress regularly assessed. The process must be fully inclusive, reaching out to non-traditional allies. True healing requires the building of trust; divisive rhetoric and blame and adversarial proceedings are unlikely to produce an atmosphere in which healing and transformation can occur. This transformation must be seen in some form of reparative or restorative justice and policies that foster systemic change.

Richmond has taken important steps to acknowledge its racial history and to engage a wide range of citizens in honest dialogue. There is a significant network of individuals and institutions who have built relationships of trust – perhaps more than most cities in America. All of the Richmonders at the summit agree that the time is ripe for another major step forward that would enable our community to truly overcome the structural inequities that are the result of the belief in a human hierarchy based on race. In the coming weeks we will be consulting with our various constituents as well as reaching out to new allies as we develop a plan. One resource that may be useful is a business case for racial equity developed by Kellogg.

The summit has been a time of intensive work, with the daily program starting at 7:00 am and ending at 9:00 pm with scarcely a break. No time to enjoy the beautiful Carlsbad surroundings! But there is a sense of urgency because of the divisive rhetoric of the presidential election and the alarm at what may lie ahead with the incoming administration.

“This week has proven to me that we can do it!” says Gail Christopher as we wrap up the summit. “It is a vision, but more than a vision it is an imperative.” She announces that Kellogg and its TRHT partners – with a combined reach of more than 200 million people – are responding to the need to bring a different spirit to the country before the Inauguration, by calling for a National Day of Healing on January 17. More details coming soon!