After a day focused on personal racial healing and relationship building, we focus today on healing the wounds of our society that result from our inherited belief in a racial hierarchy. David Williams from Harvard’s School of Public Health shares data showing the devastating impact of racism on health outcomes for people of color. His presentation entitled “The House that Racism Built” provides overwhelming evidence drawn from multiple studies.

He highlights residential segregation as America’s “most successful political ideology.” It impacts schools, employment, transportation, public safety – all of which impact health. “It is a truly rigged system based on skin color.” In a city like Richmond, Virginia, there is a 20-year difference in life expectancy between some neighborhoods.

Studies show that eliminating residential segregation would result in eliminating disparities in educational achievement, employment, and health, and would reduce by two thirds the number of births by single mothers. Discrimination also leads to feelings of disrespect and to stress that causes health problems such as high blood pressure. Williams recalls W.E.B Du Bois’ remark on “the peculiar indifference to black suffering” in America.

Surveys show that white Americans operate with a very different narrative. One in three reported they were “troubled” by Obama’s election, and because a black man is in the White House they are less willing to support efforts to further reduce inequality. “Research shows that we think with our hearts,” says Williams, therefore we need to develop stories that will “break through the empathy gap.” 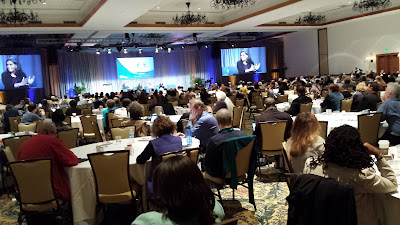 Salin Geevarghese, deputy assistant secretary for international and philanthropic innovation at the US Department of Housing and Urban Development, says, “Just putting data out there does not mean that people will draw the right conclusions. We have all witnessed the power of narrative to make data come alive.”

Throughout the day we hear powerful testimonies and reports from teams of community organizers, civil rights activists, academics, and racial healing practitioners who have been working on visions and potential strategies to develop new narratives, to overcome separation and concentrated poverty, to create equitable opportunity and fair economies, and to reconstruct a legal system that delivers justice for all. It is intense and challenging. The energy is high. Panel discussions reflect America in all its racial and ethnic diversity.

As the father of a Georgetown University alumnus, I am particularly interested in the contribution of President John De Gioia who describes the university’s efforts to address its racial history. He notes that America’s universities were complicit in establishing the notion of racial hierarchy. “The very idea of race is the product of colonial scholarship.” However, he stressed the role of higher education in providing a place where we can have “the most rigorous discourse on the most challenging issues.” He expresses alarm that funding support by states for higher education has dropped on average from 65% to 35% and in some states it is less than half that. “We are not providing the level of commitment to public education that is crucial at this time.” Civil society, of which higher education is a vital part, is the “bulwark against authoritarianism.” He says we need a new conversation in America “about what it means to belong here as a people.”

Much of the conversation is set against the backdrop of the incoming Trump administration and the anticipated assault on voting rights, legal justice, fair housing, and protection for immigrants. However as someone remarked, one result of the election is that there is now a transparency around the discourse on race: “We need to own that space.” And, Gail Christopher reminds us, “You can stand up for values without having a political conversation. These are human rights values. We need a movement that truly stands up for what we believe to be right.”