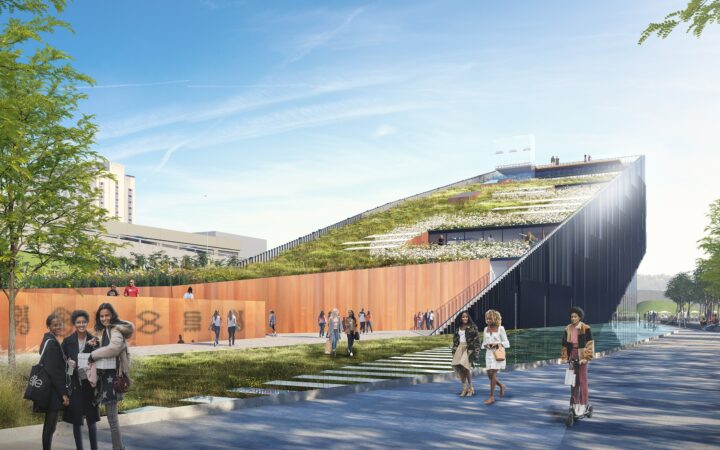 On January 10th, 2022, Richmond, Virginia, City Council approved $1.3 million in funding towards the development of a National Slavery Museum and historical campus in the Shockoe Bottom district. This downtown area was the center of a slave trading market that was second in size only to New Orleans for decades before the Civil War and the abolition of slavery. The museum will be located at the site of the notorious Lumpkin’s Jail. The 9-acre heritage campus will include a memorial park and water gardens.

A special Initiatives of Change report states: “The SmithGroup, the architectural and engineering firm that completed the Smithsonian’s National Museum of African American History & Culture in Washington, DC, has been working with the city of Richmond and a team of historical experts to manifest this vision that has been decades in the making. What is less known is how Hope in the Cities, Initiatives of Change USA’s flagship program, has played a critical role in the journey towards this museum coming to life.”

In this blog I highlight the reflections of some of those featured in the report, individuals who have been at the heart of the work to uncover Richmond’s racial history for nearly three decades. I had the honor of working with all of them. The Rev Sylvester Turner, who led Hope in the Cities’ reconciliation programs and is the co-founding director of the new Richmond National Slavery Museum Foundation, says: “This is a testament to being consistent about preserving the history of those that were enslaved. It’s a fulfillment of a responsibility that I have, our country, and our city has, in bringing healing. It’s about us being consistent in doing the work of racial reconciliation. This work isn’t a quick fix, it’s a journey you have to stay on.”

The journey began in 1993 when Hope in the Cities and its partners, Richmond Hill ecumenical center and the Alegba Folklore Society, sponsored the first public walk through unmarked black historic sites in downtown Richmond. Rev Benjamin P. Campbell, the founder of Richmond Hill, says “It allowed the retelling of history that had essentially been buried.” Over 500 persons participated in that walk, led by Walter Kenney, the mayor of Richmond. It was the centerpoint of the “Healing the Heart of America” conference, described as “an honest conversation on race, reconciliation and responsibility,” which drew people from 50 US cities and 24 countries. Following this, a widespread program was launched featuring dialogues, public forums and history walks involving thousands of residents throughout the region. Subsequently, the City of Richmond appointed a Slave Trail Commission to mark and develop a trail between many of the historical sites. Ben Campbell, Tee Turner and I were members of that Commission. Ralph White, the James River Park manager, mobilized hundreds of volunteers to clear a path, enabling walkers to trace the steps of enslaved Africans. Philip Schwarz, a professor of history at Virginia Commonwealth University, conducted vital research.

“In 2007 the Commission installed the Reconciliation Statue on the trail, at the corner of 15th and Main,“ says Campbell, “a situation which had been developed through Hope in the Cities’ relationships with Liverpool and Benin.” Liverpool was the major port involved in the transatlantic slave trade and the Republic of Benin had profited from the sale of fellow Africans. Turner explains: “In 1999, the president of Benin, Mathieu Kerekou, summoned individuals from around the world to come to Benin so that they [the leaders of Benin] could offer an apology for its role in the transatlantic slave trade. A part of that delegation was Rev. Dr. Paige Chargois who was working with Hope in the Cities. When she returned, she said we can’t just stop there. That’s when the Reconciliation Triangle was established between Liverpool, England, Benin and Richmond.”

The Reconciliation Statue is a fifteen-foot-tall bronze sculpture of two figures embracing by Liverpool artist Stephen Broadbent. Liverpool had donated a replica to Benin following the city’s apology for its horrendous history of transporting human beings. As I record in my book Trustbuilding, “Upon seeing it during an official visit to Liverpool with Richmond’s vice-mayor, Rudolph McCollum, Paige Chargois immediately declared that the project must include the Americas. Following her report to the Slave Trail Commission, Councilman El-Amin secured city funds for a second copy to complete the triangle in Virginia.” According to Chargois, it “crowned our efforts to diminish the painful memories of the trade of enslavement joining Liverpool, England, and Benin, West, Africa, in providing hallowed ground on which to plant this statue where it stands for all to see and be reminded that reconciliation is possible even across the most divisive racial lines!”

At about the same time, recalls Ben Campbell , “we uncovered the fact that Richmond had been the second largest slave market in America for the hitherto unknown Downriver Slave Trade, in which more than 300,000 persons of African descent were sold from Richmond to the cotton and sugar fields of the South from 1830-1860. We then uncovered Lumpkin’s Jail, one of the major slave jails in that market, and ultimately the postwar site of the founding of what became Virginia Union University.”

“Shockoe Bottom is a world heritage site,” says Janine Bell of the Elegba Folklore Society, another founding member of Slave Trail Commission. “Just as with Gorée Island, Elmina Castle or Ouidah, people are and, more so, will make pilgrimages to Richmond to find the missing pieces to our evolution puzzle, if it is developed properly. This is a different kind of development than what Richmond is accustomed to. The necessary and honorable development will put black stories first.”

It’s encouraging that this work of recognition and healing of racial history bridges political lines at the state as well as local level. In 2007, led by Governor Kaine, Virginia became the first state to formally apologize for its support of slavery, and his successor, Gov. Bob McDonnell, a Republican, was the first to pledge state funds for the development of the museum.

Ben Campbell concludes: “That excavated slave jail will be the hard, undeniable artifact on which the National Slavery Museum will be built.  The Museum will tell the story of enslavement, of struggle, and ultimately of victory for the untold half of the American Revolution.”

See the full Initiatives of Change installation on the museum and film of the 1993 walk. See also Trustbuilding: An Honest Conversation on Race, Reconciliation, and Responsibility (Corcoran, University of Virginia Press 2010 and 2017) for the detailed history of Hope in the Cities