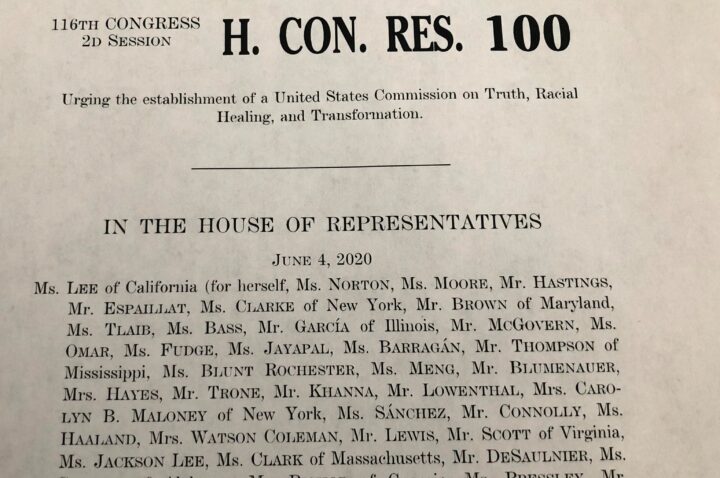 I am happy to share this guest column by my longtime friend and colleague Michael R. Wenger: In the wake of the televised murder of George Floyd by four police officers in Minneapolis, protesters in communities throughout the country have demanded the “defunding” and “reforming” of police departments.  Hopefully, this will lead to major structural reforms in policing.  But if history is any guide, these reforms will simply put a band-aid on the problem, and within a few years, racist police practices will re-appear.

That’s why the introduction on June 4 by Congresswoman Barbara Lee (D-CA) of H. Con. Res. 100 with more than 130 co-sponsors is so important.  The resolution urges the establishment of a United States Commission on Truth, Racial Healing and Transformation.  The resolution calls for us to address the underlying cause of racist behavior, the embedded belief in our society of a hierarchy of human value based on such superficial characteristics as skin color and facial features. It holds the promise of the permanent transformation of our society into one in which black lives are valued equally with white lives.

From the abolitionists to the civil rights warriors to today’s Black Lives Matter activists, we have consistently treated the symptoms of racism rather than addressing the underlying cause—the racial hierarchy.  Thus, our hard-won gains have too easily disintegrated over time.

Emancipation of enslaved people and the brief period of Reconstruction were followed by nearly a century of Jim Crow racism.

The Brown v. Board of Education decision of 1954 succeeded in overturning laws mandating racial segregation in schools, but over the past three decades we have seen a trend toward the re-segregation of our public schools.

The Civil Rights Movement resulted in the Civil Rights Act of 1964, Voting Rights Act of 1965, and Fair Housing Act of 1968.  But largely because of lax enforcement of these laws and hostile Supreme Court decisions, we have seen persistent residential segregation, stubborn job discrimination, and dogged attempts to suppress the vote of people of color.

Clearly, putting a band-aid on the symptoms of racism has not cured the disease.  A Truth, Racial Healing and Transformation Commission could be the cure.  This would not be a replica of South Africa’s Truth and Reconciliation Commission or of the numerous other such Commissions that have arisen over the past several decades.  Of course, the murderers of George Floyd, Breonna Taylor, Rayshard Brooks, Elijah McClain and countless other unarmed black men, women and children must be severely punished.  And we must institute reforms that eliminate the daily police aggressions toward people of color.

But for these reforms to endure, we must end the false belief that some lives matter more than others.  The TRHT Commission would focus on raising public awareness about the truth of our racist history and its legacy, and it would engage in activities that build healing relationships across racial and ethnic lines and enable us to embrace our common humanity and learn to see ourselves in one another.

The concept of healing must be clearly understood.  All of us—black, brown, and white—have been wounded by the racism of our past and present.  Healing must be about more than just changing racist policies and practices in our institutions.  Healing in this context is about bridging the wide gulf created by the racial hierarchy and helping us to understand that we are one people.  It is about reminding each of us of our own humanity and welcoming the power we have to eliminate what divides us and cherish what binds us together.  It is about committing ourselves to winning the war against racism, not just the individual battles.  It is about understanding that band-aids inevitably will be ripped off to expose once again the underlying and unhealed wound.  It is about living up to the purpose of our Constitution to “form a more perfect union.”

TRHT efforts already are underway on 23 college campuses of varying sizes and student body compositions and in 14 geographically and demographically diverse jurisdictions.  Representative Lee’s resolution would build on these efforts and integrate the process into widely diverse communities and organizations across the country.

The healing process does not replace any of the other approaches to fighting racism—protests, boycotts, legislation, and the like.  Rather it complements and supports them by helping us to understand the depth of the bonds we all share.  When we embrace our common humanity and learn to see ourselves in one another, the issues become our concern rather than just “their” concern.  In a real sense the healing process reflects the appeal of President Obama in a speech during his 2008 campaign:

“…I believe deeply that we cannot solve the challenges of our time unless we solve them together, unless we perfect our union by understanding that we may have different stories, but we hold common hopes; that we may not look the same and may not have come from the same place, but we all want to move in the same direction: toward a better future for our children and our grandchildren.”

Michael R. Wenger is an adjunct faculty member at The George Washington University, a consultant on race relations, a senior fellow at the Association of American Colleges and Universities, and the former Deputy Director for Outreach and Program Development for President Clinton’s Initiative on Race.

Read more about the TRHT process in this commentary by Gail C. Christopher, Ph.D.,  a race relations expert and the architect of the Truth, Racial Healing, and Transformation (TRHT) framework. She previously served as executive director of the Institute for Government Innovation at Harvard’s John F. Kennedy School of Government.