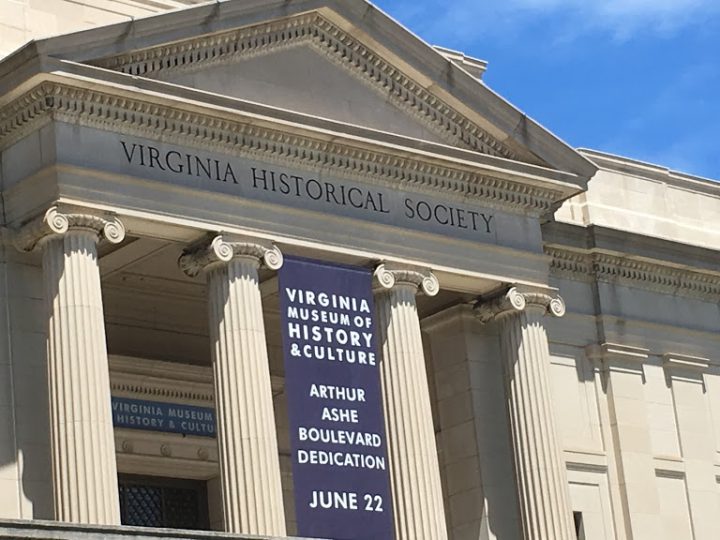 On Saturday, June 22, several thousand Richmonders celebrated under a clear blue sky as state and city leaders dedicated the Arthur Ashe Boulevard to the city’s most distinguished native son. The event also highlighted the opening of an exhibit at the Virginia Museum of History & Culture depicting the struggle for black equality and marking the 400th anniversary of the arrival of the first captive Africans to English North America.

We heard the veteran Civil Rights leader John Lewis delivering a rousing keynote. “We cannot remake what happened 400 years ago,” said the Congressman from Georgia, “but we’re here today as one people, as one family.” Senator Tim Kaine of Virginia called the name change “an act of healing.”

Ashe grew up in a segregated Richmond. As a young black tennis player, the future Wimbledon and U.S. Open champion was barred from playing on the Byrd Park courts at the south end of the Boulevard and was confined to practice on segregated courts in the north of the city.

Honoring Richmond’s true heroes has been a long struggle. Twenty-two years ago, after an intense public debate, a statue honoring Ashe – who won international renown as a civil rights activist and humanitarian – was unveiled on Monument Avenue, previously the exclusive domain of massive sculptures of Confederate generals who had fought to maintain slavery. Senator Kaine was serving on the city council at the time. He recalled a seven-hour meeting following a public hearing at which more than one hundred people spoke.

Kaine and other speakers paid tribute to the late Senator Benjamin Lambert, III, a distinguished African American state senator who raised funds for the statue, and Tom Chewning, a white business leader, who led the campaign to put it on Monument Avenue. Chewning said afterward that some people with whom he had close relationships were upset, but “That’s the price you pay.”

Now we are at another historic moment for Richmonders as we work to create a new narrative for the city. “This is truly a spectacular and momentous day,” said David Harris, Jr., Ashe’s nephew who led the drive to rename the road formerly known simply as the Boulevard. Previous attempts had failed in 1993 and 2003. Harris enlisted the support of Kimberly Gray, an African American council member whose district includes a portion of the boulevard. Her tireless efforts paid off.

“I think that the renaming shows that even though it took a long time, these things can be done,” said historian Ed Ayers, president emeritus of the University of Richmond, in an interview with Richmond Times-Dispatch columnist Michael Paul Williams. “People understand that memorialization matters; that the names that we give things have consequences.” The crowd applauded when Mayor Stoney announced that an elementary school formerly bearing the name of Confederate General Jeb Stuart has been renamed after Barrack Obama.

My one brief contact Arthur Ashe was in January 1993. We were preparing for the Healing the Heart of America national conference the following June which featured Richmond’s first public walk through its racial history. My wife’s godfather, “Bunny” Austin, the celebrated British tennis player, a Wimbledon finalist in 1932 and 1938, was a close friend of Ashe. Bunny encouraged me to call Arthur and invite him to play a role in the conference. I knew Arthur was ill but to my surprise he picked up the phone himself. He listened politely and expressed some skepticism that Richmond would ever have an honest conversation on race! However, he suggested I get back in touch once plans for the conference were firmed up. One month later he was dead. With our young sons we stood in line with thousands of Richmonders to pay tribute to him as he lay in state in the Governor’s Mansion.

I am told that some members of the Ashe family were initially hesitant about the renaming of the boulevard. They felt that Arthur, a remarkably humble person who had a passionate conviction for education, would have preferred to see the money spent on schools. However, I believe he would have rejoiced to see his hometown at its best last Saturday and to feel along with the jubilant crowd that Richmond could show the way to a nation much in need of hope and healing.