It is difficult not to write about Ukraine at this time. And I realize how little I and most of us really know about this huge country, the second largest in Europe, which now stands at the crossroads of history. Recently, I read Bloodlands: Europe between Hitler and Stalin by historian Timothy Snyder of Yale University (Basic Books, 2010). It is a sobering read, a meticulously researched history of how 14 million people were murdered in Eastern Europe between 1933 and 1945. Snyder writes, “During the years that Stalin and Hitler were in power, more people were killed in Ukraine than anywhere else in the bloodlands, or Europe, or in the world.” For both Hitler and Stalin, Ukraine was the place that “would enable them to break the rules of traditional economics, rescue their countries from poverty and isolation, and remake the continent in their own image.” Everything depended on control of Ukraine’s fertile soil and its millions of agricultural workers. In 1933 Ukrainians suffered the “greatest artificial famine in history of the world.”  As a result of Stalin’s policy forced of collectivization and export of grain from starving villages, 3.3 million Ukrainians died (some say up to 6 million). In the spring of 1933 they died at a rate of 10,000 a day. Thousands of others were deported to the Gulag or to Kazakhstan. Then, in 1937 and 1938, NKVD operatives shot 70,868 inhabitants of Soviet Ukraine in the operation against the so-called “kulak resistance.”  A disproportionate number were of Polish origin. Of the 681,692 death sentences in the Great Terror, 123,421 were carried out in Soviet Ukraine (this does not include natives of Ukraine shot in the Gulag). When Hitler seized control in 1941, writes Synder, he tried to realize his own colonial vision beginning with the shooting of Jews and starvation of Soviet prisoners of war. The German plan envisaged “a vast eastern colony.” The native pollutions were to be deported, killed or forced into slave labor. Depending on demographic estimates, between thirty-one and forty-five million peoples, mostly Slavs were to “disappear.” Under the “hunger plan” sixty-five percent of the population of western Ukraine and eighty-five percent of Poles, and seventy-five percent of Belarusians were to be eliminated. The German military conquest failed, but three million Ukrainians (non-Jews and as many as 900,000 Jews) were killed, sometimes with the assistance of local police forces. Further suffering followed when the Soviets regained control. Synder records that many new Gulag prisoners were from the lands that Stalin had taken in 1939 with German consent and then took again in 1945. Between 1944 and 1946, more than 182,000 Ukrainians were deported from Southern Ukraine to the Gulag. This is just some of the history that continues to impact Ukraine today and which the courageous young Initiatives of Change team in Ukraine has set out to heal as described by one of its leaders, Lena Kashkarova

. It is a daunting but vital task. Last fall Lena, who is of mixed Ukrainian-Russian background, interned in Richmond, Virginia, with the Initiatives of Change program Hope in the Cities. She is currently in Crimea interpreting for CNN. Her recent emails help to correct some impressions created by the media: 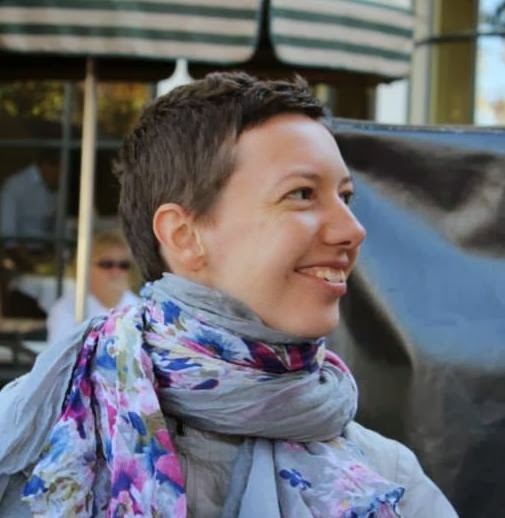 Events of the last three months united people from different backgrounds from East and West alike. As I see it, a big part of the population finally lost Soviet identity and became aware that Ukraine is home for all of us, no matter what origin we come from, and learned to hold responsibility for this home. Another important factor is the role of churches of all confessions as well as other religions who demonstrated enormous support for the protest movement. It started with the beatings by riot police youth by offering refuge in the Orthodox monastery, and it continued with the installation of a prayer tent at Maidan square, and turning churches into underground hospitals; then providing space for cooking, running dialogues and meetings in the cities where no other institution would dare to host them; staying for hours between riot police and protesters; and reading the last rites for those killed.  At times of attacks on Maidan, all the churches rang bells in warning.In the past there was lots of controversy between the Ukrainian Orthodox Church of Ukrainian Patriarchy and Ukrainian Orthodox Church of Russian Patriarchy (which is subordinate to the Russian one). Not any more. The Ukrainian Orthodox Church of Russian Patriarchy condemned Russian occupation of Crimea along with its Ukrainian counterpart, despite a completely different message from its ‘boss’ in Moscow. In my opinion they all became not separate institutions but one real Christian Church and played a huge role together with doctors, journalists, veterans, students, etc., in making true what seemed to be completely impossible three months ago. Paradoxically, Russian occupation both divided and brought more unity among Ukrainians. There are people from East and West alike who are ready to defend their country. Russian-speaking Ukrainians with Russian background are ready to fight against the Russian army. There are almost no Russian citizens in Ukraine! There are many people of Russian or mixed origin (as I am) whose native language is Russian, but they are not citizens of Russia. There are huge lines of those who want to get mobilized in the Ukrainian army in a country where [normally] people pay bribes and do everything not to be mobilized for [required] military service.   At the same time there is a huge divide with those people who hold what I would describe as ‘Soviet’ identity and – what is most important – have listened to Russian propaganda that pours from Russian TV and other media. The amount of lies and bluff is just overwhelming. Overhearing Russian TV is just painful. It is not just manipulating facts; it simply fabricates news and rouses hatred! No wonder people who listen to it are scared of “fasсists” from the West and are full of hatred towards them. This propaganda will affect our society for a long time. It’s easy to bring division and conflict. It is very hard to reconcile.