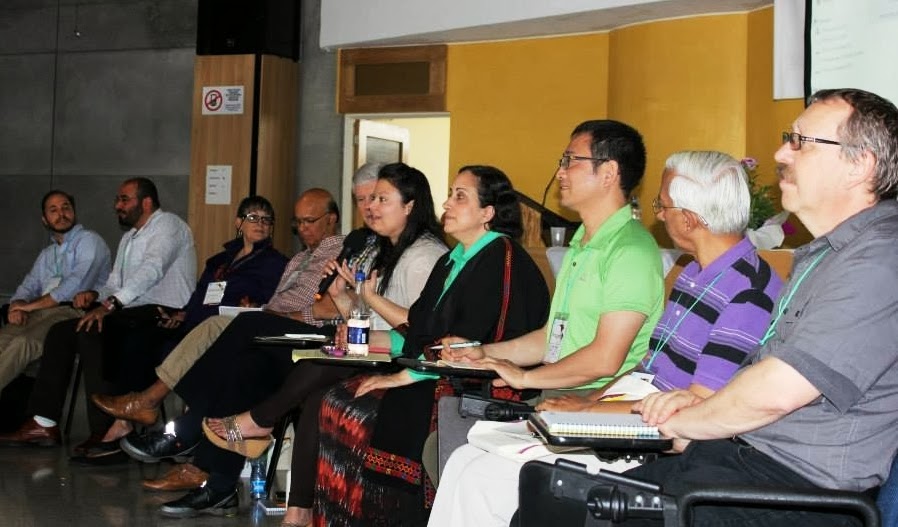 Today the International Council of IofC reported to the Encuentro on their visits to several Latin American countries. The council members hail from Mexico, USA, Canada, India, Taiwan, Nigeria (absent because of visa difficulties), Egypt, the UK, Australia and Sri Lanka. All were deeply touched by the warmth of hospitality they received on their travels. One said, “I have become addicted to hugs!” Each of the Council remarked on the ways in which Latin American teams were integrating the core principle of IofC in all their activities. A young Argentinian responded: “Thank you for making me feel so proud of being a Latin American.”

Edward Peters, the executive vice president of IofC International, said that after a survey of 350 people from 102 teams, the Council believed it should focus on nurturing the spiritual well-being of the movement; facilitating networking and capacity building; and providing strategic direction and focus. Omnia Marzouk, IofC’s international president, left the participants with three challenging questions drawn from her own decision to accept her leadership role: “Do you believe that ordinary people can do extraordinary things? Are you willing to serve despite your limitations? Are you willing to move outside your comfort zone and be led by God?”

This afternoon we spent several hours with pictures and first-hand accounts exploring a historical timeline of IofC in the Americas, from the 1930s to the present day, posted along the length of one wall. We were privileged to have with us “veterans” of more than sixty years who provided institutional memory. We heard about a young trade unionist who encountered IofC in 1948 and later became the president of Costa Rica; and John Riffe of the American Steelworkers who brought a new spirit to US industry in the forties and fifties; the remarkable resolution of labor-management conflict in the port of Rio de Janeiro in the late fifties, and initiatives to rehouse whole communities by favela leaders; theater productions that played before tens of thousands of people in Bolivia and Peru in the sixties; the growth of the Quente que Avanza youth training program beginning in 1970; a village business in Jamaica that became the rural economic development model for the nation in the eighties; peace seminars in El Salvador in the eighties and nineties; racial reconciliation work in the US and the launch of Hope in Cities in 1993; emergence of of a vibrant new team in Colombia over the past decade, and much much more.

As well as celebrating the successes, we talked  honestly about events and ways of working that had harmed a spirit of unity or had broken trust. Some moving apologies were made. The session ended with everyone walking silently along the timeline.Throughout these days the interpreters have done an incredible job of

enabling Spanish, English, and Portuguese speakers to understand each other in sessions that often last for two hours or more. They must be exhausted!

Dancing by a nationally recognized Colombian dance group provided a wonderful ending to a memorable day.